This trample session was my most public and interesting session. I met Miss Kitty through an ad that I’d placed on Craigslist. She wanted a few bucks and I needed a model for a monthly update. She got my yahoo id and began chatting with me only hours after my posting of the ad. I was quite surprised when she said she was open that same evening. Now, I expected a fast response on models from Craigslist, but not THIS fast! I found out that she worked only 15 minutes from me. We agreed to meet after work in the parking lot of a large Dollar General store in between our two workplaces. I had NO clue what she looked like, what she was driving, etc. I was totally in the dark. As I sat in the parking lot after work waiting for her, I began to wonder…what if she was a cop and they were cracking down on “online predators”?? Well, I assured myself, I was no predator and I meant this woman no harm, I wasn’t scamming her in any way and we weren’t meeting for sex. I was safe.
About that time a minivan pulled up next to my car. It was her. She got out and came around to meet me. She was about my height, attractive, sandy blonde hair. She must have worked in an office judging from the attire. She had on cute chunky heeled sandals that showed off her very pretty feet. After a brief introduction, I told her what kind of shots I wanted to do. I was very surprised that she was ok with anything I wanted to dish out! She’d gone into my site during work and viewed lots of the photos, even sent some to her husband and he approved! We were in business! We first started with some shots of her feet. The traffic passing by only 15 feet from our makeshift “studio” made it hard to hear at times, but she posed nicely. Soon we were ready for the trampling. She asked if I was sure I wanted to do it right there by the street. Truth be told, I’d never been trampled out in public like this before, so I was a bit nervous, but I told her I was fine if she was. We agreed we weren’t doing anything obscene or off color so we went for it. Her sandaled foot pressed down into my stomach as she stepped up the first time. She didn’t weigh much, maybe 135-140 at the most. Nevertheless, the heel gouged into my belly sending small shocks and twinges through my flesh. My shirt was still on, but the heels dug in nicely. Next I wanted to do barefoot. This was what I’d been waiting for. She had very smooth, very pretty feet so I was anxious to see what they felt like on my skin! Her first step up was solid and sure. I’d swear that she’s trampled before. Her bare foot sank into my stomach, forcing the breath from me. Her other foot came to rest on my chest for balance and she stood there as the camera snapped off a photo. We did that a few times before I got brave with her.
“Care to stand on my head and/or face?” I asked her. Without so much as batting an eye, she said yes! I let her practice a time or two before getting it on camera, but again she seemed like a natural. She stepped right up, squashing my lips and nose under her cool bare soles. In most cases I find that the trampler needs me to turn my head to the side, especially if this is their first time to trample. It’s just easier to stand on the side of the head than an upturned face. Not so with Miss Kitty. Her bare soles flattened out my face, making a sure standing spot. She stood there for photo after photo, mashing my cheeks under her weight.
After we had enough photos she stepped off giggling. She said she wanted to do this again! We kept in touch for awhile after that until I eventually moved and lost her contact information. 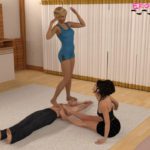