It started as an innocent night. Goddess asked me to come over and stay with her daughters while she and Bishop were out at the annual Houston Rodeo. I didn’t expect them home anytime early, so I made dinner, we watched a few movies and then before we realized it, it was 1am and time for them to get in bed. It took about an hour for them to fall asleep as I quietly surfed the internet on my tablet while reclining on the couch.

I got comfy with a blanket and a couple of big pillows around me and was prepared to wait awhile for Goddess when I heard a car pull up into the driveway. I strained to hear the conversation but from what I could tell, Goddess and Bishop got tipsy at the last concert and a friend had driven them home. They were outside giggling and trying to be quiet when they came tiptoeing through the front door.

I didn’t say a word and looked back to my tablet. I could hear them kissing by the door. I glanced up to steal a quick peek. Goddess was stunning in her western shirt, short denim skirt and cowboy boots. Bishop was dressed similarly, with a western style shirt, large size 13 cowboy boots and a hat that he’d now tossed carelessly onto the table as he wrapped his arms around her. He walked her backwards, kissing her the whole time.

I don’t know if it was intentional, I don’t know if they even saw me on the couch. I tossed my tablet out of the way just as Goddess’ ass landed right across my chest. I huffed when she hit but didn’t say a word. In the heat of the moment, she didn’t even look down at me. Bishop saw me lying there but didn’t say a word…Goddess was already unzipping his pants and unbuckling his belt. He put his hands on her shoulders and closed his eyes as she stuffed his cock into her mouth and began sucking him off.

She sat there for a  few moments blowing him until she leaned to one side and realized I was there. “OH MY GOD,” she said, laughing. “With all the pillows and stuff, I didn’t even realize you were under there! Get down here!” she said, pointing to the floor in front of her. “You’re going to step on him with boots?” Bishop asked. I wasn’t sure if he was concerned or curious. “He’s got a high tolerance for pain, don’t you?” Goddess asked. I laid down on the floor in front of her.

“Clothes off!” she giggled. “But…we’re in the living room.” I protested, my eyes darting towards her daughters rooms down the hall. She put her left size 11 boot on my neck. “If you’re quiet, no one will wake up,” she said. She took her boot off my neck and I quickly stripped and threw my clothing to one side. I laid back down and the boot went back on my neck. She put her right boot down on my stomach, reached around Bishop and, grabbing his ass, pulled him towards her.

He put one large cowboy boot onto my stomach next to hers and stood up on me. He stood there for a moment as Goddess sucked his dick, deep throating him over and over while I laid there groaning softly. After a few moments, she stopped and looked down at me. “Still doing OK down there?” she asked quietly. They both giggled and Bishop stepped backwards off of me. I took a deep breath. “You were good and quiet!” Goddess said. “Come here,” she motioned to Bishop. “Come try this!”

He walked over and she took her boot off my stomach. “Look, grind him right here,” she said, pointing to my lower stomach. “Right across the diaphragm.” He put the heel of his boot on my stomach and pushed. I grunted a little. “No, no, you gotta mash him, grind him! Put some weight into it!” She grabbed his ass as he stomped his boot into my stomach and started grinding as he leaned into me. Goddess giggled. “It’s my turn now!” she said. She got up from the couch and put her boot across my stomach.

She held onto Bishops hands and stepped up onto me, balancing on one foot. She only had to bounce once. She crushed me and I farted. They both burst into laughter and quietly hushed each other as I laid there turning red. “Move over here,” Goddess said as she motioned towards the middle of the floor. I quickly moved over and laid on my back. She stood on one side of me and she put Bishop directly across, on the other side. She put her right boot on my stomach and instructed him to put his right boot next to hers.

My stomach was covered under these two alphas boots. The thought struck me and I started to get hard. Goddess giggled when she saw it and took both of Bishops hands. “Step up,” she said, pulling him towards her as she stepped all her weight onto the one boot across my belly. Bishop did the same and my eyes rolled as they came together in a kiss, squishing me flat under their weight. I looked down at my body, my stomach flattened under them, I looked up and saw them in a drunken embrace, kissing.

They were smiling and enjoying themselves. I softly groaned once more and they stepped off. “Not bad!” Goddess said. She was having fun. She stepped up onto me with a foot on my stomach and one on my chest and wrapped her arms around Bishop. I looked at her boots, standing on my naked body, squishing me onto the floor. I looked at her strong calves. I was looking up further under her skirt when I locked eyes with Bishop.

He has his hands on her ass, lifting her skirt as she was nibbling and kissing all over his neck. The next thing I felt was Bishops boot on my face. He turned my head to one side and put his boot down firmly on my head, holding me there as they continued to kiss. I laid there for what seemed like forever as they made out. I couldn’t see anything with Bishop holding my head down, all I could see when I turned my eyes to the side was the sole of his size 13 boot on my head.

They cooed and kissed until one of Goddess’s daughters coughed back in her bedroom. Goddess quickly stepped off of me. She ignored me completely. She took Bishop by the hand and lead him back to her bedroom and shut the door. I listened intently as I scrambled around to get my clothing and get dressed. I was covered in boot prints, I had a dirty boot print on the side of my head and my dick was hard as a rock, but I managed to slip quietly out of Goddess’ house and lock the door behind me. I hope they had a great time together 😉 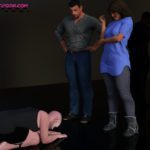