This was a day I wouldn’t soon forget. Goddess invited me over to shower with her. I was giddy with anticipation as I knocked on her front door. She ushered me into the house, closed the door and led me back to her bathroom. The shower was set up for her elderly mother. It was large enough to walk into and had a shower bench at one side. “Well, don’t just stand there, strip and get in,” she told me. I quickly did as she said. She stripped and walked into the shower with me, closing the glass door behind her. She sat on the bench and pointed to the floor in front of her, against the opposite wall. As I sat against the wall, facing her and on my knees, she was adjusting the water temperature.

She pulled the hosed shower head from the wall and handed it to me. “This first time, you’ll rinse when I say. Pay attention, because from now on, YOU’LL be doing the shaving.” She grabbed a razor and a can of shaving cream, lifted her left leg and planted her foot firmly on the middle of my chest, pinning me against the wall. The water was running hot now and steam began to rise in the shower. “Give me a little water,” she said. I raised the shower head and let the hot water run over her calf and thigh, caressing with my other hand as I went. She smiled and leaned forward to put shaving cream on her calf. The act of leaning forward put more weight onto her foot. I was being crushed against the wall by a nude Goddess with her barefoot on my chest. I couldn’t help it. I started to get hard.

“Well, look who came out to play!” she said as she playfully kicked it with her other foot. That only made it worse. I was rock hard now and my heart was racing. She could feel it under her sole and she smiled. She leaned forward again, crushing me again as she spread the shaving cream all over her calf and up her thigh. Naturally, she started shaving at her ankle. The entire time she was leaning forward I couldn’t take my eyes off the large, soft bare foot pressing me, pinning me, crushing me against the wall. I looked up and caught her eyes and smiled. “Water,” she said. I snapped out of my daydream and rinsed her razor off. Steam rose up around us and I looked back at her foot and strong calf holding my body against the wall. She leaned forward and continued shaving. The pressure caused my dick to rise up again. She just smiled and kept shaving. I was in heaven. She continued up her calf and was soon finished with her thigh. “Water,” she said again. I rinsed off her calf and thigh, again, caressing and feeling her smooth skin under my fingertips. She leaned back and took her foot off my chest. I took a deep breath as I looked down at my body. The footprint covered my sternum and I could see the little toe marks between my breasts. She raised her right leg and gave me a firm little stomp to the chest. She placed it the same as she had the other foot. She didn’t have to say anything this time, I was trained.

I took the shower head and let the hot steamy water wash over first her thigh and down to her calf. She was smiling the whole time, watching me serve her. I was still hard and using her left foot, she played with my dick while I was rinsing her leg. That sent shivers and chills through my body. Electric tingles shot through me when she put her bare heel on the head of my cock. I got goose bumps. She giggled, grabbed the shaving cream and leaned forward to put it on her leg again. The crushing sensation made me moan a little and she smiled as she leaned forward again to run the razor up her ankle, over her calf and over her thigh. I watched every trace, every line she shaved. “Water,” she said again. I rinsed and caressed her leg again. “Good boy,” she said as she removed her foot. She took the shower head from my hand, sat back on the bench and pointed to the floor in front of her. I immediately laid down. She placed a foot on my stomach and one on my chest and stood to her feet. I moaned out of sheer ecstasy and she stepped off. She turned around and looked down at me as she raised the shower head to rinse herself off. She put her right foot down onto my stomach. “You have 1 minute to jack off, then you need to get my towel and lotion for my feet.” She didn’t have to say another word. My dick was hard as a fucking rock from being under her soles all this time. She stood there, with her foot pushing down into me, as the hot water ran down her face, over her tits, down her leg and onto me. I didn’t need a full minute. The view of that foot on my stomach was enough. I came hard and she giggled as I squirmed on the shower floor. I finished and laid there for a moment soaking in the feeling. She aimed the shower head down at me and rinsed me off. She laughed. “Now go get my stuff, you little slut.” I jumped up from the floor and hurried to bring her towels back. I can’t wait until next time! 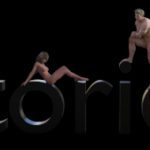 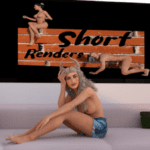