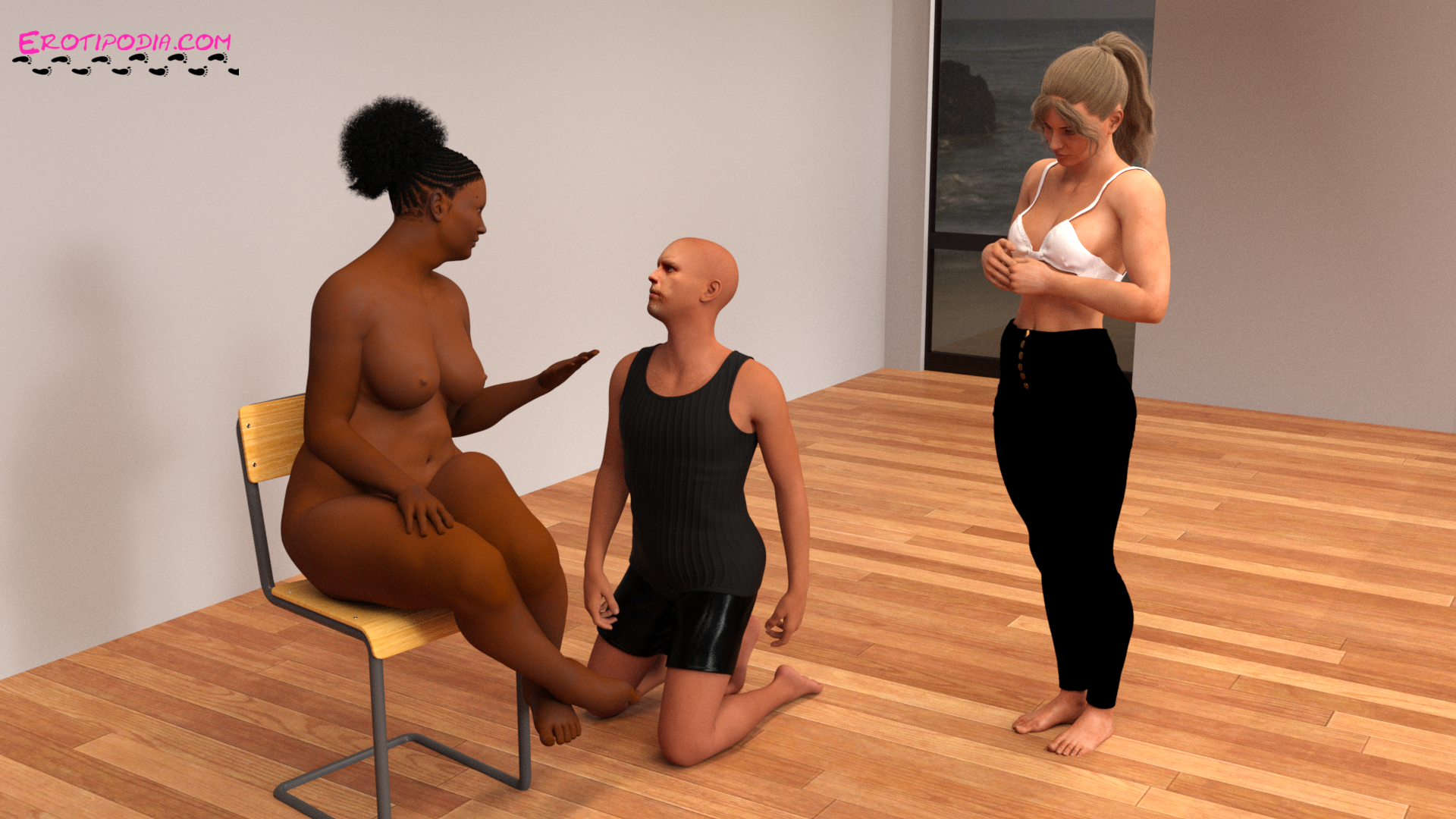 I’ve been serving Goddess for a couple of years. I don’t have a girlfriend or anything, so my time has all been used for work and serving the Goddess and her family. I wasn’t sure how to tell her that I’d met a girl…a girl who seemed to like trample and being trampled as much as I did. She’d even had a girlfriend or two step on HER. I was excited. Hillary was the best thing that had happened to me since Goddess. Goddess knew something was up when I wasn’t answering her messages as quickly as I used to. I told her I was coming over and had something to tell her. Hillary and I arrived at her home around 9pm. She told me to come to the door…usually I come in through the “servants entrance”… a window into her room. I had barely knocked on the door when Goddess pulled it open. She smiled at Hillary and told us to come in. We walked into her home and she closed the door behind us. “Follow me”, was all she said. We went down through a hallway and walked into Goddess’ room. My eyes darted around the room, my brain pinpointing all the places that I’d lain on her floor under the feet of both her and her lovers. She closed and locked the bedroom door behind us.

“So is this what you wanted to tell me?” she said, motioning for us to sit down. “Yes, Goddess” I said kind of sheepishly. Hillary smiled. I’d told her about Goddess and she thought it was interesting. Now she was seeing it all in front of her, live and real. “Is she the reason you haven’t been returning all my messages??” Again I said quietly, “Yes”. “Do you LOVE her?” Goddess asked. “I think I do,” I replied. “She even likes the fetish and has tried it a few times herself!” I blurted out. “Oh really now?” Goddess said as she looked over at Hillary. Hillary froze, now the center of attention. “Um, I had a girlfriend stand on me once. That was it. I liked it but never did anything more”. I could tell Hillary was a little nervous now. “Come here” Goddess said. She didn’t ask. She looked Hillary right in the eye and commanded her. Hillary got up slowly from where she was sitting and walked towards Goddess. Goddess walked over and sat on the edge of her bed. “Right here,” she said pointing at the floor at her feet. Hillary stopped and turned to look at me. My eyes were wide. I couldn’t tell if Hillary wanted permission or if she was scared shitless, so I just nodded. She gulped and turned back to Goddess. She got down on her knees, then leaned over and laid on the floor in front of Goddess.

Goddess didn’t hesitate. She put one large foot down on Hillary’s stomach and the other on her chest. I felt my dick tingle as I watched Goddess’ foot squash down on Hillary’s tits . “Now you, come here” Goddess said, looking right at me. I walked over and following her pointing finger, I got down on my knees on the floor in front of her. I could see the wild exhilaration in Hillary’s eyes. She was enjoying this. Her breathing had sped up and she was watching every move Goddess made. “Do you love this girl?” she asked again. “I think I do” I said again. That wasn’t enough for Goddess. She pressed down harder on Hillary’s chest, her size 10 foot flattening Hillary’s tits against her rib cage. “Strip,” was all she had to say to me. I’d been at Goddess’ feet before. I was naked in seconds.

Hillary’s eyes grew wider but I could tell she was waiting to see what was next. “You, remove your clothes” she said as she took her feet off of Hillary. Hillary followed my lead and was stripped in seconds and laying back down on the floor. That pleased Goddess and she put her feet back down on Hillary’s warm naked body. Goddess saw my dick getting harder as I watched her using my girlfriend as a footrest. Her feet sinking into Hillary’s stomach was really turning me on. Raising her foot off of Hillary’s tits, she told me “Come here and kiss it”. She held her sole up to me as I crawled over to her and started kissing her sole.

She lowered her foot until it was touching my rock hard cock. “Come over here. I want you to fuck her in front of me.” Now Hillary and I had been having plenty of sex, and had even talked about a threesome, but we hadn’t counted nor even imagined something like this. I crawled over to Goddess. She lowered her foot and put it back on Hillary’s stomach. “Fuck her.” she said again. I looked at Hillary long enough to know that she wasn’t going to object. This would be interesting. I slid up between Hillary’s legs and pushed my cock into her hot wet pussy.

It was incredible. Her body temperature had risen..she was VERY turned on. She was enjoying this too. Her juices dripped off my balls as I went in and out of her slowly….then Goddess stood up.

Still keeping her feet where they were, she just stood straight up. Hillary’s tits, if not flattened before, were crushed now. Goddess’ size 10 foot covered both breasts, compressing her chest down. Hillary was gasping and concentrating on breathing. Goddess’ other foot completely flattened her stomach. The sensation was incredible as her foot squashed deeper into Hillary and crushed my dick, still balls deep in her wet pussy. Hillary gasped as I pulled out. I literally FELT her pussy crushing under Goddess’ foot as my cock slid out of her.

Goddess stepped off and walked to her dresser. As she looked around in a drawer, I stretched and laid on top of Hillary. “I told you she was an amazing Goddess!” Hillary just nodded. She was out of breath, but she was loving it. I didn’t realize Goddess was behind me until the leash was already around my neck. She pulled and tightened it. I sat up on my knees, ready to obey. “You may go into her again,” Goddess said. I moved between Hillary’s legs and went into her again, Goddess standing behind me holding the leash. As I pulled out, Goddess raised her foot and put it down on my ass. “Go deeper,” she said. I pushed into Hillary again, making her moan in pleasure. Apparently this wasn’t deep enough for Goddess. She stomped down on my ass, shoving my dick so deep into Hillary that it made her yelp in pain. “Now come out,” she said, pulling my leash backwards. I pulled back with my hips, pulling my wet dripping dick out of her. Hillary took a few short deep breaths before Goddess put her foot back on my ass and shoved my dick inside Hillary again. She pushed down for a second, then released, pulling on the leash for me to pull out again. She did this three times while telling me “You may fuck her, UNDER my feet. You may see her AFTER I’ve gotten what I need from you.”

I was panting hard now. Goddess saw that we were both about to climax so she took charge. “Both of you, on your backs NOW!” I quickly got off of Hillary and laid on my back beside her. My cock was still throbbing and Hillary was dripping on the floor. Goddess did Hillary first. Putting one foot down on Hillary, heel in her bladder, she shifted her full weight onto one foot and stepped up onto Hillary. Hillary came HARD. Her body convulsed a few times until Goddess put her other foot down between her tits and pushed her back to the floor. I laid there watching her trample and control Hillary and wasn’t aware it was my turn until I felt her foot stomp down onto my belly. She stood there on us both, one foot on Hillary’s stomach, one foot on mine. Shifting her weight onto me, Goddess looked down on me. “You know the rules. Do you accept?” I nodded as my eyes rolled. Goddess shifted her weight onto her other foot deep in Hillary’s stomach. “Do you agree to this?” Goddess asked her. Hillary wheezed out a “Yes” and nodded her head. “Good girl,” Goddess said as she stepped off of us and sat on her bed. “I need a footrest” she said plainly. Hillary and I were both under her feet in a flash. Goddess now had two footrests lying and massaging her feet. I’m sure she’ll find more uses for us later.